Throwback Thursday – What I Was Riding 5 Years Ago

Its still one of my favorite bikes to ride after all these years. Pretty much everything except the fork and crankset has been changed since the original build, including the frame (now its a 2013 El Mariachi frame, same size). I made some really good decisions and documented the process of arriving there in the post below. I thought since I still enjoy riding this bike (maybe now more than ever) and continue to benefit from the decisions which were made back then, they warranted sharing with them with all of you.

So, today starts a new chapter in my life.  One that introduces the recent trend of our mountain bike culture toward bikes with 29 inch tires.  The pros and cons of 26 inch vs 29 inch is a dead horse that has been overly beaten.  I will not discuss those here.  I will however attempt to discuss a few of the decisions I have made in the last few months that has led me to this intersection at the crossroads of 26 inch and 29 inch.

In the beginning of June I competed in my first race, an endurance race no less.  The 6 hours of Temecula.  It was a solo event and I rode the Titus Motolite (set at 100mm front and rear travel) after updating it with all the components I thought would help in the race and having both shocks rebuilt.  It cost me my Eventide Timefactor delay pedal as well as a Ernie Ball volume pedal, not to mention my wife graciously signed off on spending a few hundred we didn’t have in order to keep the bike in good working condition.   She says she wants me to live a long time and mountain biking, especially training every week, is obviously great cardio exercise that is likely to help with the whole longevity thing, so its a little easier than asking for a new delay or overdrive pedal for guitar.  I enjoy both quite a bit, so any time I am shown grace toward spending money on gear for my hobbies, I am super grateful.  All that to say that leading up to the race and for the whole month of June, I was trying to figure something out.

What was my next bike going to look like and when would be a wise time to buy it?

This question plagued me.  As soon as I started asking it, I noticed little things, like my gearing on the cassette would be skipping just a little, but enough to make me cringe whenever I heard it back there on the rear wheel.  Then I had really bad chain suck one day and couldn’t shift to the granny gear on the crankset or I would surely have the chain wrap all the way around that small ring and dig into my frame as I tried to get the pedals to go around while climbing the next hill.  There were many other little things, but the drivetrain stuff stuck out the most and drove me crazy.  I was trying to train for this first race of my life, and a big one to boot, but I couldn’t stop focusing on mechanical issues.  I nursed that drivetrain through the training by riding my old 1991 Specialized Stumpjumper (mostly on road) and putting more wear and tear on it, as a preventive to wearing the drivetrain on the Titus to the point that I would have to drop another couple hundred (minimum), that we did not have to drop, on a new drivetrain that I didn’t know and would possibly have new issues with right before the race.  I learned all the little consistent quirks (there were definitely inconsistent ones too) that kept popping up with the Motolite’s drivetrain, to the point where I felt confident enough to race it like that.

I had some issues during the race, but finished 30/61 racers in the Open Men’s 6 hour solo.  That felt pretty good and I am definitely hooked on endurance racing, but would like to try epics, point to point races, 100km, 100 milers, etc.  I would also like to plan somebikepacking trips with some guys who are crazy enough to join me on some self sufficient adventures, both in San Diego County and beyond.

So back to the question that plagued me.  What was the next bike going to be and when was wisest to buy it?

For all my racing before, I never thought XT was bad, but I got a XTR crankset from a buddy for under $100 and I had to buy it.  Its an awesome crankset and hard to go back to XT after that, but a cassette wears out so fast that I can’t bear to spend more than 90 on one.

Then I started looking at forks.  No thanks..that is just too crazy to even look at.  Used or closeout deals are all I could bear to look at.  A new Fox fork?  No way.  My current fork is good, not great, but good.  I like it.  How long will it last though?  Yeah, it just got rebuilt.  Thats good, but if I am training and racing?  It won’t last long between rebuilds. Those cost $ too.  5 rebuilds will probably cost as much as a good used fork.  Which makes me wonder how much I could sell my used fork for.  Maybe 200 bucks?  Maybe?  I better sell it before it goes down further.  Yikes.

That brought me to my frame.  Should I sell it before it diminishes in used frame value even further?  How much can I get for it today?  How much less will it be tomorrow?  Its a great frame.  I love it.  It is a little high maintenance though, I mean, less so than most other FS frames…its bearings are still super tight and smooth after years of good use.  No complaints there, but the rebuilds have the same price tag associated with them as my fork.  That doubles the price I need to pay every year or so for the rebuilds if I am training and racing on this bike.  Double YIKES.  Wait, triple yikes…I forget that the drivetrain would need to be replaced about every time I need my shocks rebuilt.  HOW DO YOU OTHER MOUNTAIN BIKE RACERS TRAIN AND RACE WITHOUT BECOMING BROKE?!

Yeah, riding my 1991 Stumpjumper has helped offset the wear and tear on my Motolite, but how long can that last before I have to replace that old 7 speed drivetrain?  I haven’t even looked into what it would cost to replace that.  It has recently, barely started skipping too.  Ugh.

Other questions started racing through my mind now.

I started talking to my buddy at the local Specialized dealer who I worked with at a bike shop back in 2005-2006.  He was telling me about how many racers he was seeing at endurance events who were now riding 29ers.  I was curious.  I knew some of the benefits, but what I remembered from 2006 was that 29ers were good for big guys around 6′ and up and good for faster courses with less switchbacks/tight turns. I am 5’9 and LOVE switchbacks/tight turns and we have a lot of them here in San Diego county.  I never looked seriously at 29ers because of this.  After my first endurance race and hearing about so many people riding 29ers lately in endurance races, I was VERY seriously looking intowhy they chose to ride 29ers for this application.

After reading so many opinions on 29ers and endurance races/rides, I started realizing that even short women who podiumed in endurance events had been riding 29ers.  I realized virtually all adult riders could potentially find a good fitting 29er now.  It has been 5 years since I had been selling bikes and I had NEVER had the opportunity to sell a customer a 29er back then, they were just too rare and not many frame builders were making 29er frames.  Now that is definitely NOT the case.  I think every major MTB manufacturer now makes one or more 29er bikes.

One of the guys who used to be a regular customer at the shop I used to work at and someone who I have been on group rides with goes by the handle “Pacman” on many forums.  Pacman recently bought two 29ers and I was picking his brain on how they rode since he is about my same height and still rides many of the trails I know by heart.  Many of those are riddled with switchbacks and tight, twisty sections.  I specifically asked him about switchbacks and he told me which exact ones he couldn’t clear.  I was very impressed that he could clear so many and I got the impression that he actually thought he could clear those particular ones he had troubles with up to this point, if he just kept giving them a shot and figuring it out.  That was amazing.  I was really encouraged.  Could I start planning to try a ride on a 29er?

I found a few shops in San Diego to test ride 29ers.  I will keep this short.  One was a FS, one was a hardtail.  The hardtail was a large frame, but felt really good.  The FS felt good to, but kinda vague, like in a comfortable, but not precise way.  Hard to describe, but it was nice.  The big wheels with the greater gyroscopic feeling was cool.  I liked it right away.

I kept researching and found that Pacman, as well as others I have met and talked to on forums and through blog comments, had encouraged me that hardtail 29ers off road felt like they had some suspension when comparing to 26ers.  Maybe I could get a hardtail and prevent the need to rebuild one shock per year!

I kept reading more.   I started thinking about my single speed days back in 2005-2007 when I rebuilt my 1992 Mongoose Hilltopper into a single speed.  I loved it.  I could always just grab it and go.  It was always ready and never needed much maintenance.  Just what I have been thinking about lately.  Could I build up a 29er single speed (SS) that would suffice for endurance racing?  I did more research.  Oh yeah, many people do just this exact thing.  A few Tour Divide Racers ride 29ers which are both SS and rigid.  Yes, hardtails with rigid forks that they RACE for 2700+ miles while climbing over 200,000 feet offroad.  Wait, rigid?!?  For real?  Ok, more research…do many people do this, or just the “crazies” who ride the Tour Divide?

Yeah, regular guys and gals are going to rigid SS 29ers as their everyday rides and many actually race, even endurance race.  Some even claim its easier and feels like cheating.  Yeah, sounds crazier still, but then again, I just started liking the challenge and pain I get from cramping during 6 hours of riding in a race.  Maybe I am a little crazy and should just jump in and get a rigid SS 29er too!

I did.  Enter the 2011 Salsa El Mariachi with Fargo fork. 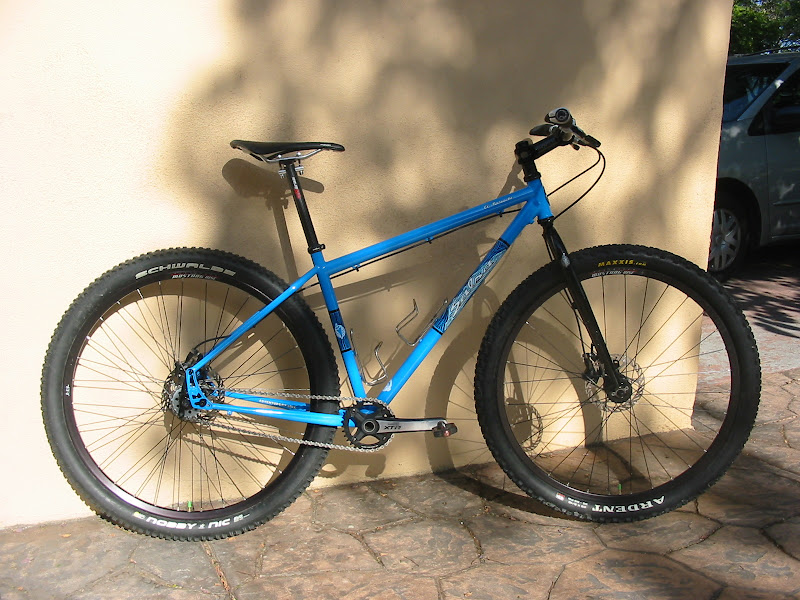 Stay tuned for a ride report in another post coming soon!  In the meantime, feel free to check the pictures: 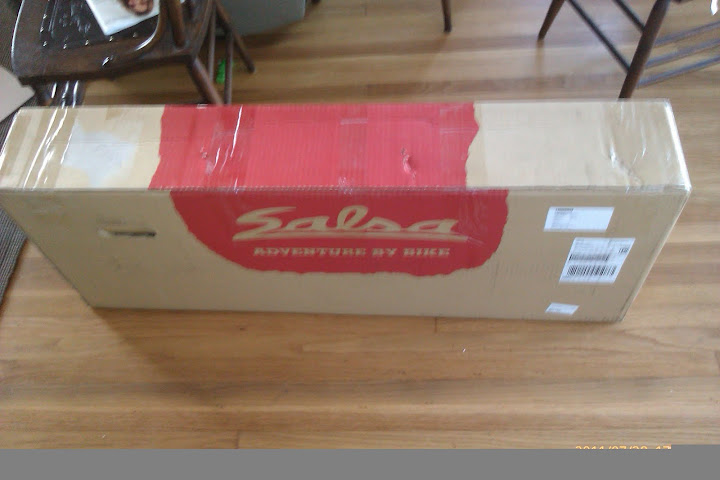 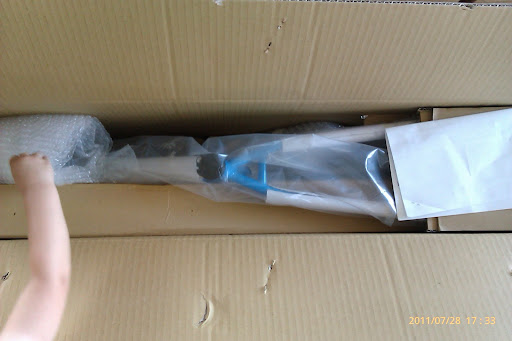 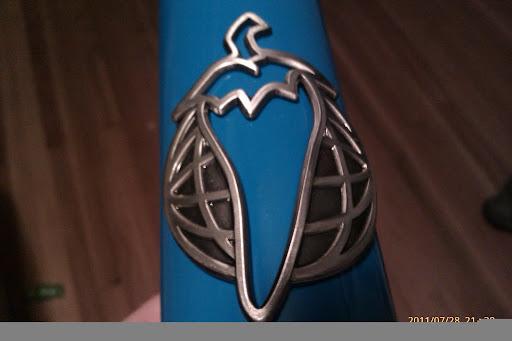 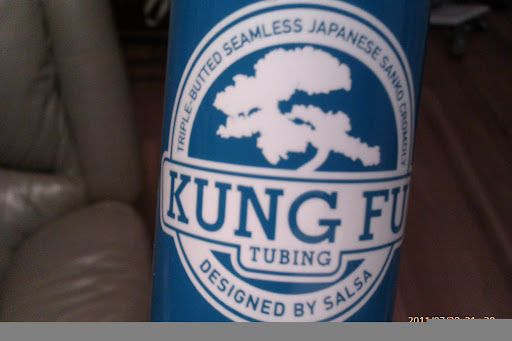 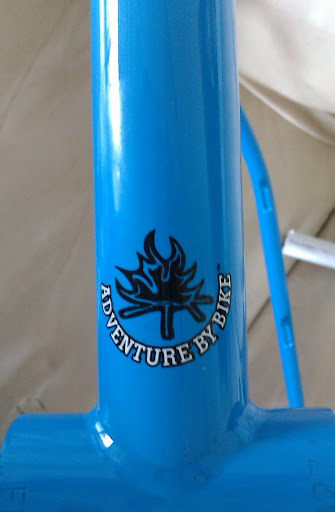 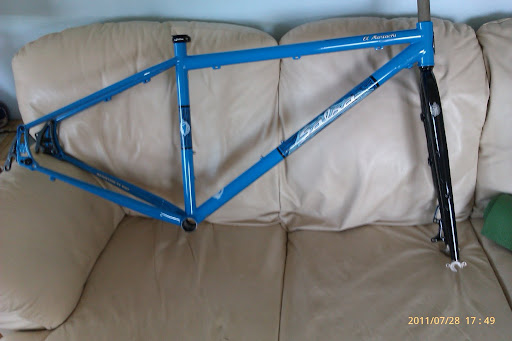 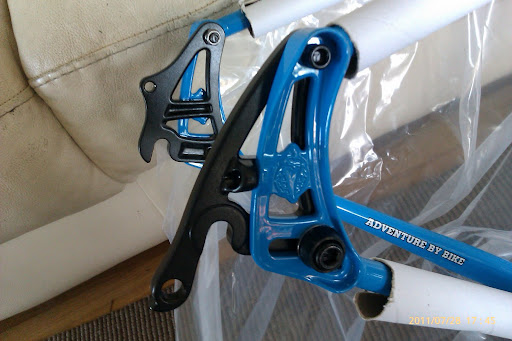 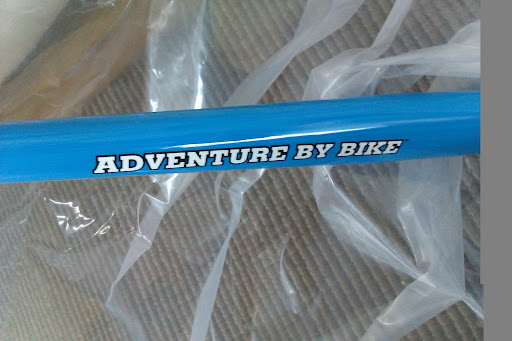 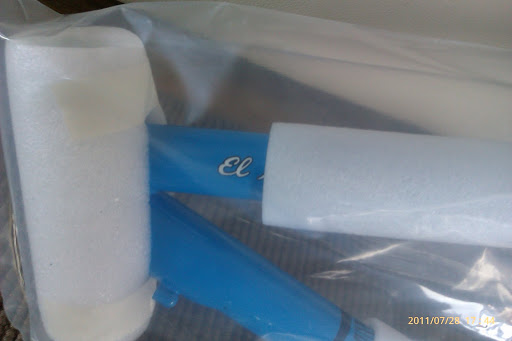 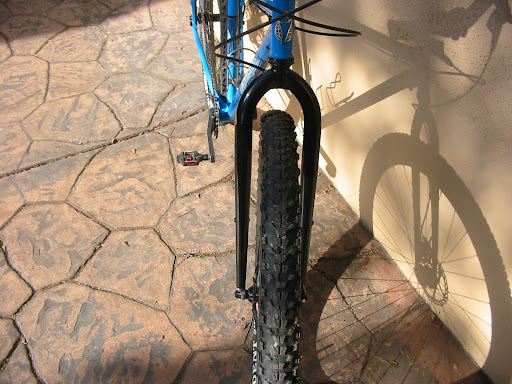 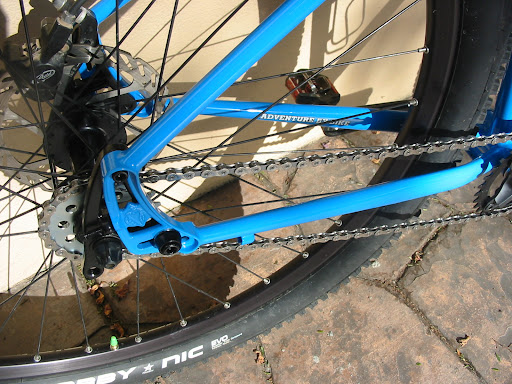 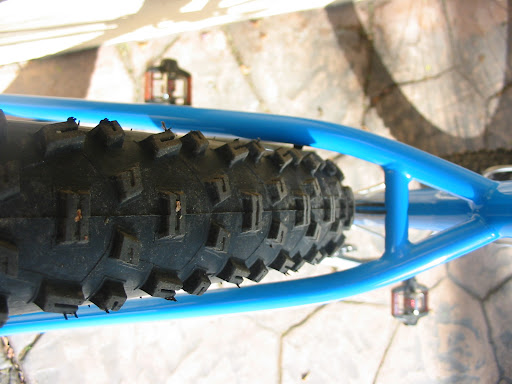 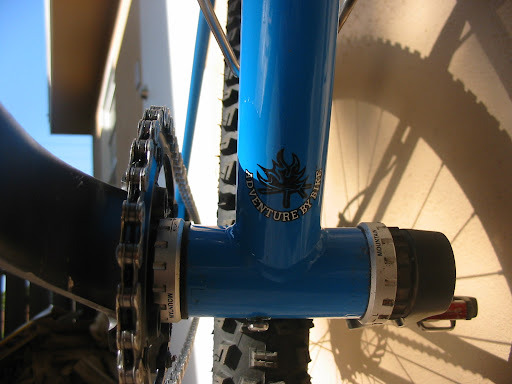 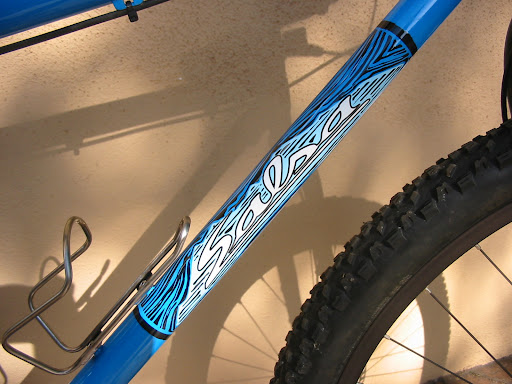 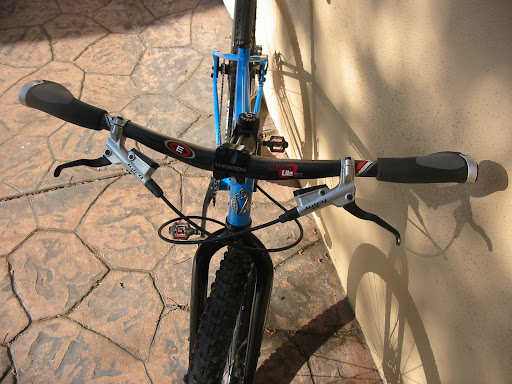 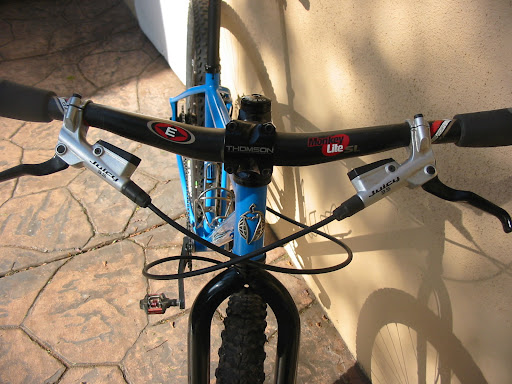 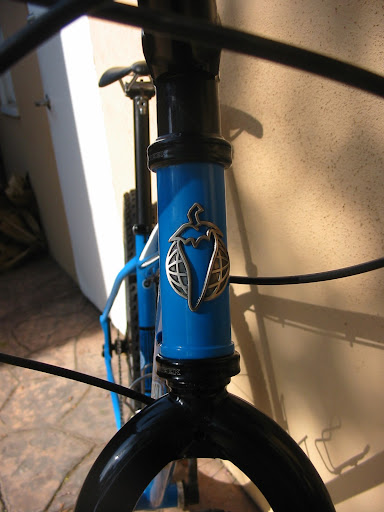 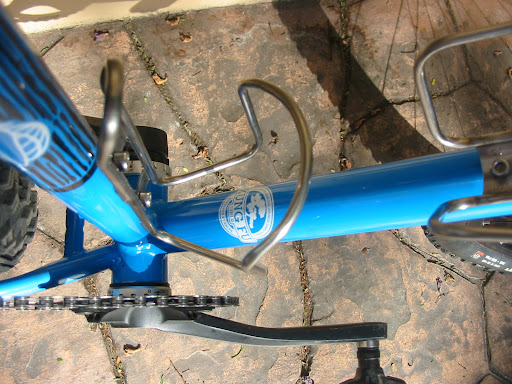 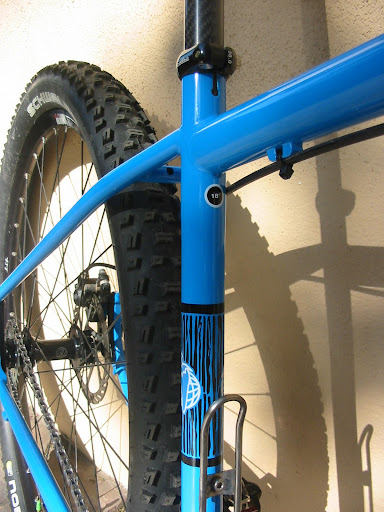 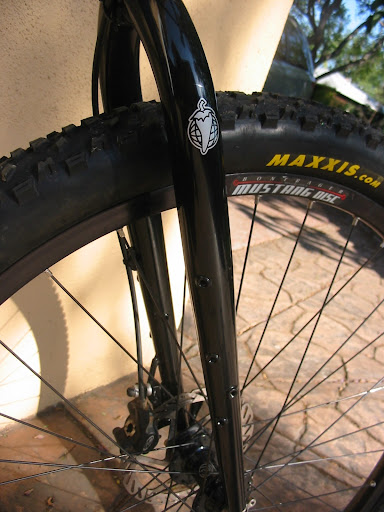 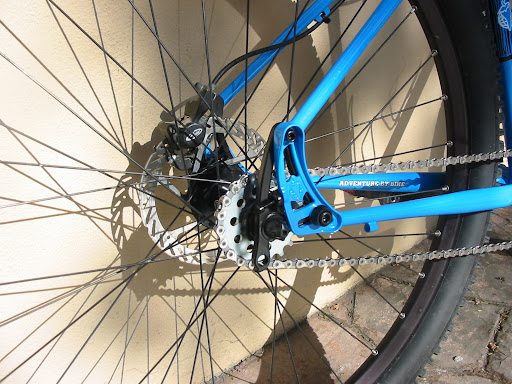 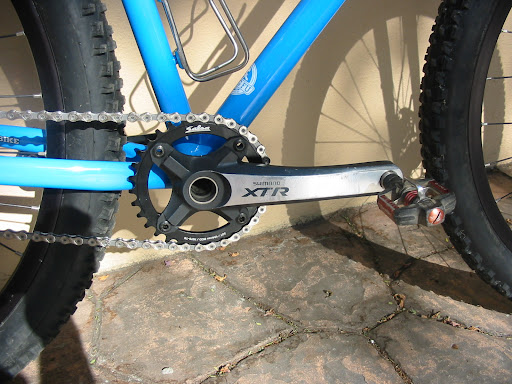 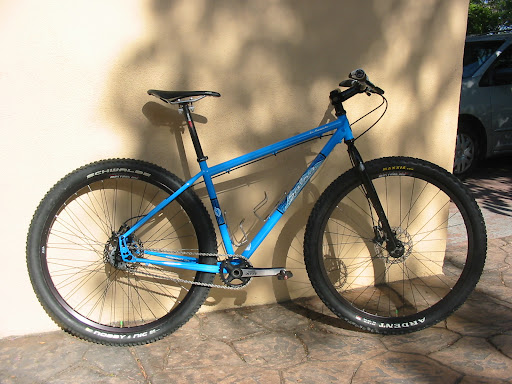 Thanks for stopping by and reading it all. Check out my week 1 initial impressions ride review here to read about what I thought after just a week (~70 miles) of riding it.