The Salsa Deadwood is a new bike from Salsa Cycles for 2016. 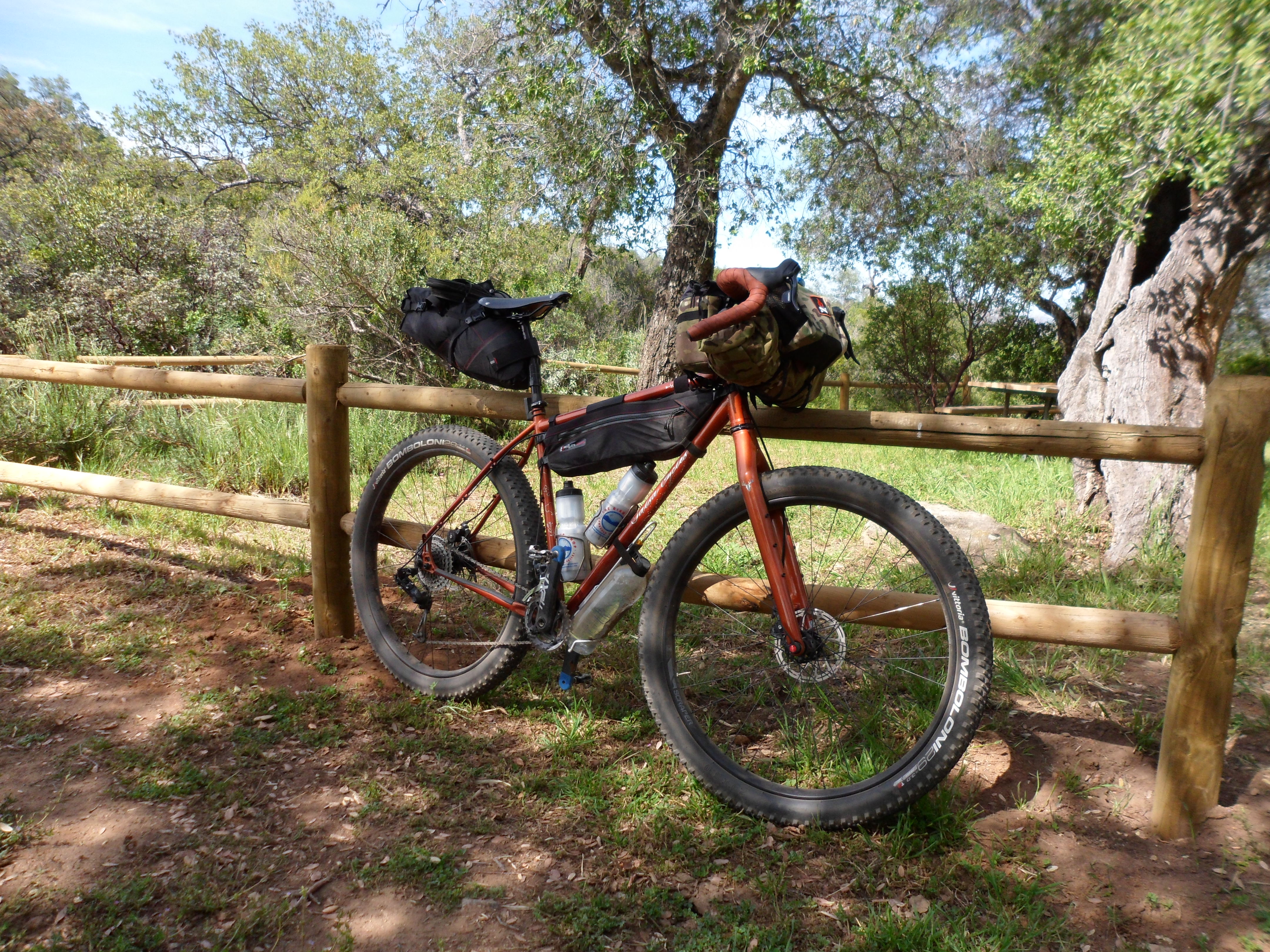 With flared drop bars, a chromoly frame, and 29×3.0 tires, it appears to take some of what has worked for Salsa’s Fargo model and increase the capabilities for confidence in a wider variety of terrain. We took some video during our first look at the Deadwood at a Salsa Cycles Demo Day at Lake Hodges in Escondido back in 2015 (read that article and watch the video here: http://www.ridealongside.com/salsa-cycles-2016-deadwood-29plus-video/).
Our friend Rich Wessels, from The Bike Shop Temecula, just north of San Diego, CA, recently took his Salsa Deadwood out for a proper bikepacking shakedown trip. Being one of the most intriguing bicycles released specifically for bikepacking in 2016, we had to get all the details on how it went, since our impressions of riding this bike during a quick demo were likely to be very different than a longer, loaded trip would be.
Here are some of the questions we asked Rich:
Ride Alongside:   Tell us a little about yourself Rich. What’s your cycling history and background that led you to The Bike Shop Temecula?
Rich:   I was fortunate that I got started on two wheels at a very young age and I’ve been riding Bicycles and motorcycles for over 30 years now. In that time, I have dabbled in every aspect of the sport. BMX, DH, cross country, road, and now bikepacking. My first job in high school was at a bike shop and I have bounced around the bicycle and moto industries ever since. Back in 2010 I was working at a large motorcycle dealership and my dad was selling his grading business and looking for something to do in retirement. Eight months later we were opening the doors of The Bike Shop.
Ride Alongside:   What bicycle(s) were you primarily riding when you began to have your sights set on the Deadwood?
Rich:   Well I have a bit of a bike addiction so there were quite a few in my garage at the time but the two I was riding the most were my GT Grade and Surly Krampus. I was loving the Krampus, but it had a few small issues that were starting to drive me nuts and I was looking for a new frame to replace it with. The Grade was a great road bike except all my road rides ended up being at least 50% single track and I was wishing for bigger tires.

Ride Alongside:   Can you share a little with us about how you arrived at choosing the Salsa Deadwood for your next bike?

Rich:   We had just picked up Salsa bikes at my shop last September and since I knew the Deadwood would be a limited bike I wanted one for the store but wasn’t sure yet how popular the bike would be. So I did what I normally do in this situation. I ordered the bike in my size and if it didn’t sell I would add a new bike to my garage. At this point I wasn’t even sure I wanted the Deadwood and it was going to be 3-4 months before the bike would show up. While I was waiting for the Deadwood I stumbled across Chumba bikes and found their Ursa solved all the issues I had with my Krampus except they didn’t make it in XL. After a few conversations with the great guys at Chumba I had an XL frame on order that was scheduled to be ready in April. When the Deadwood showed up at the shop in January I built it up planning to put it on the showroom floor but after a quick ride around the parking lot it went home with me that night. I wasn’t quite sure what I liked about the bike so much but I knew it was too fun not to buy. 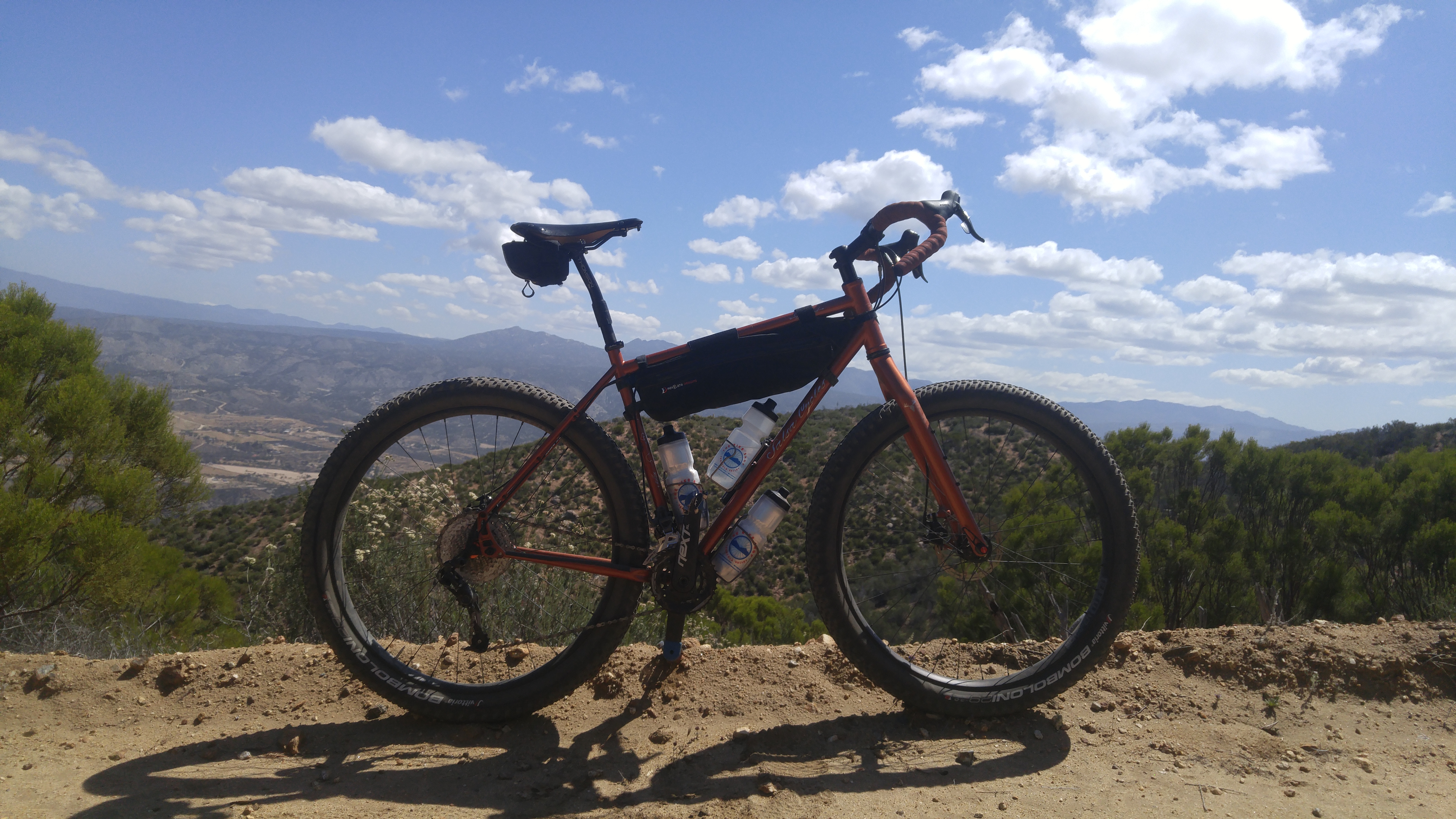 Ride Alongside:   How would you describe the ride similarities and differences between the Salsa Deadwood and Surly Krampus?

Rich:   They are are both fast rolling stable bikes that are great choices for long rides and bikepacking trips. My Krampus with a lefty fork really shined on rough and technical trails. it just eats that stuff up with out beating you up. If your looking to really crank out the miles on gravel, fire road or smoother trails the Deadwood seams to be the faster of the two and the multiple positions of the drop bars adds some comfort .

Ride Alongside:   With the drop bars that allow for different hand positions, and different
geometry than other mountain bikes, like your Krampus, did you still feel
confident on technical singletrack? What type of trails do you feel the
Deadwood is best suited for? When would you prefer a bike like the Surly
Krampus or Chumba Ursa instead?

Rich:   I can ride just about any trail on the Deadwood that I could on my Krampus but the really technical stuff just isn’t as fun or easy on my body. The narrow bars lack the leverage of flat bars and makes it a bit harder to control the bike on rough trails especially at speed. Between the hand position of the drop bars and the ridgid fork my body definitely feels more beat up after a long technical ride. I’ve actually been toying with the Idea of trying a suspension fork to help smooth stuff out. That being said the bike really excels on gravel, fire road and smooth single track but when it gets steep and rocky I prefer my Krampus. 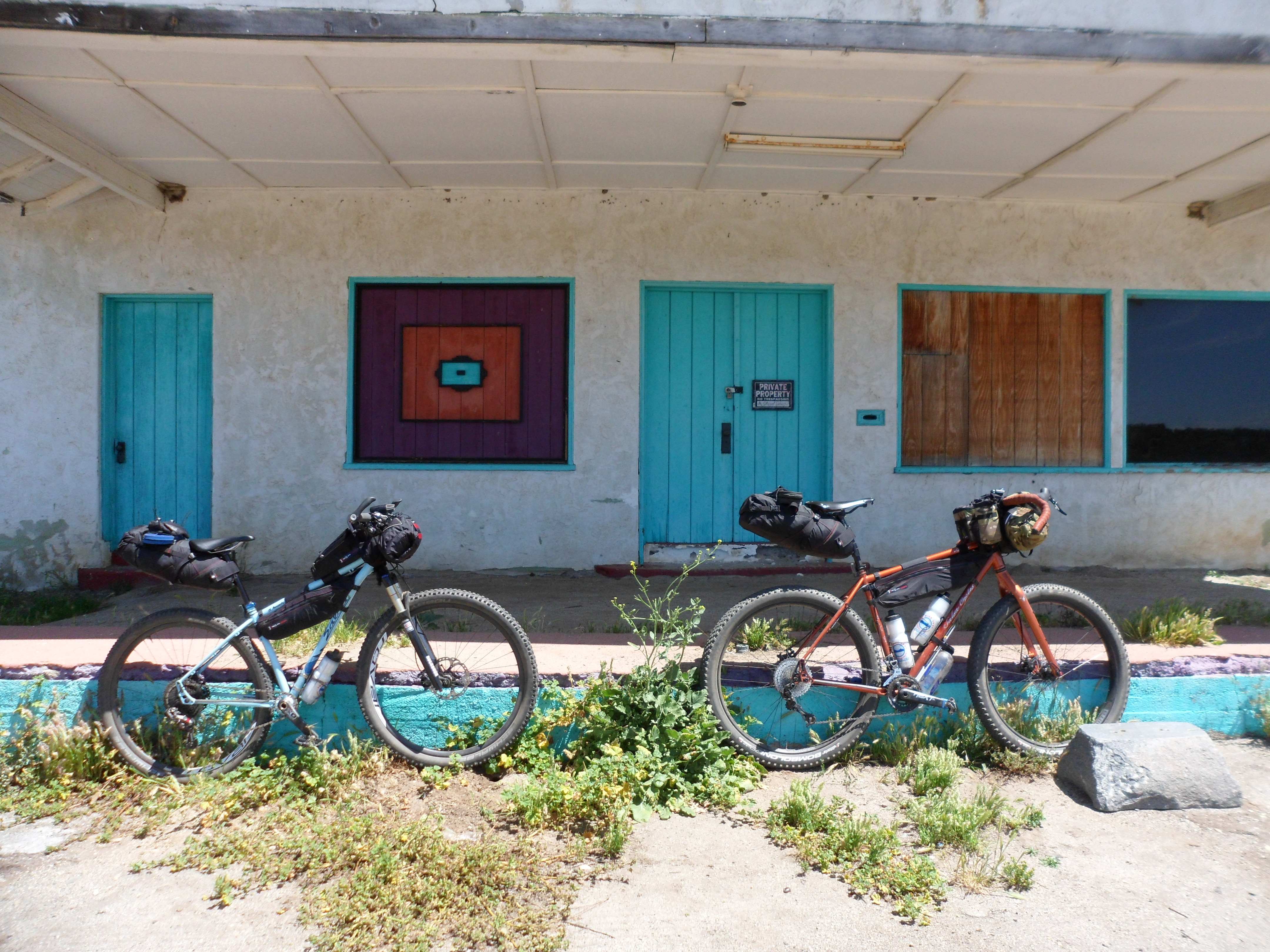 Ride Alongside:   What additional gear or accessories did you immediately know you wanted to purchase with this bike and what gear did you already have in your possession that you envisioned using with the Deadwood?
Rich:   I’m actually still riding the bike pretty much stock. Right off the bat I had to change out the stem and swap to a setback post with my Selle Anatomic saddle. Also I’m not a small guy so I put on a Praxis 11-40 cassette for the really big climbs. Ever since I started riding plus bikes I have had a love hate relationship with Surly Knard tires, they roll great but I don’t like how loose they can get in the corners. I’ve also had some bad luck cutting them but that might be on me. I gave them another shot on the Deadwood but ruined the sidewall on one and impaled the other, again probably my fault not the tires but I have been having great luck with the new Vittoria Bomboloni’s. 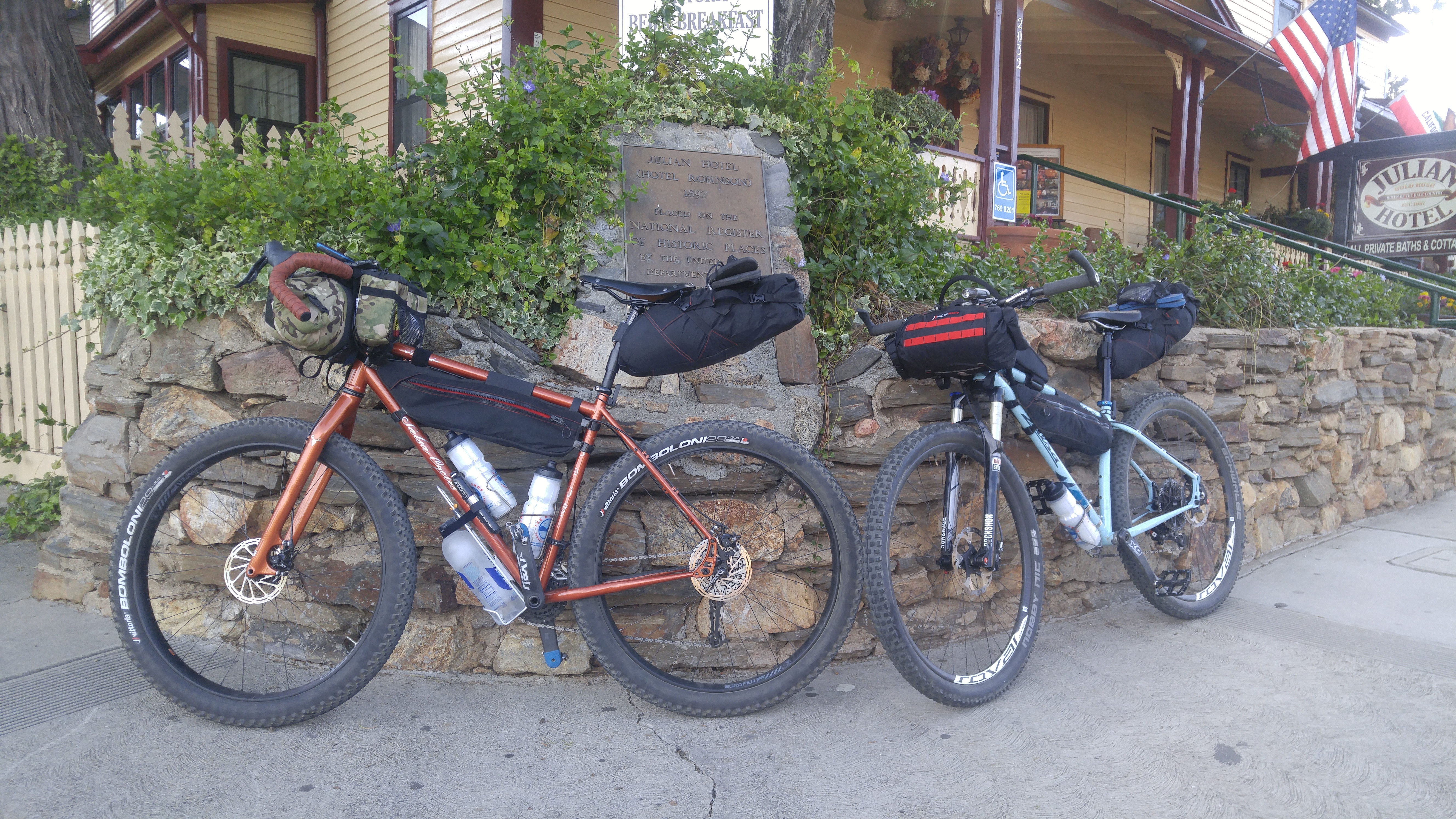 Ride Alongside:    Did you have any unforeseen issues with the gear mounting to or working with the Deadwood?
Rich:   No, the bike is pretty straight forward and all my existing bags worked out great. Having the handle bar bag wedged between the drops on the woodchipper bars was a bit of a pain but not a big deal. My tent poles were almost too wide to fit between the drops and it was bit awkward to get stuff in and out of the bag while on the trail.
Ride Alongside:  Did you have a planned route for the first bikepacking trip even before the bike arrived? What was the route, where did you camp, and what determining factors led to you choosing that route for the first overnight on the Deadwood?
Rich:   I actually never planned to go bikepacking on the Deadwood. I thought I would primarily use it for long gravel rides and I would use my 29+ mountain bike for bikepacking trips. But since I was still waiting for my Chumba and the Deadwood seemed to excel on rough trail I decided to take it. I was trying to plan something really cool for my wife’s first overnight trip and I remembered some friends had done the coast to crest trail and it seemed to check all the boxes for what I was looking for. Point to point, more decent then climbing, epic views, not to technical and cooler temps then out in the desert. The two issues that seemed to pop up for this route was lack of water for the first 53 miles and a less then stellar place to camp for the night. The water was easy to take care of by taking a slight detour on the way up to Julian to stash a dromedary bag of water and a couple beers at our campsite. The camp area is located at the intersection of Orosco Truck Trail & Lower Santa Ysabel Rd. and only a couple hundred yards from Pamo Rd. Just a little too close to civilization for my liking. 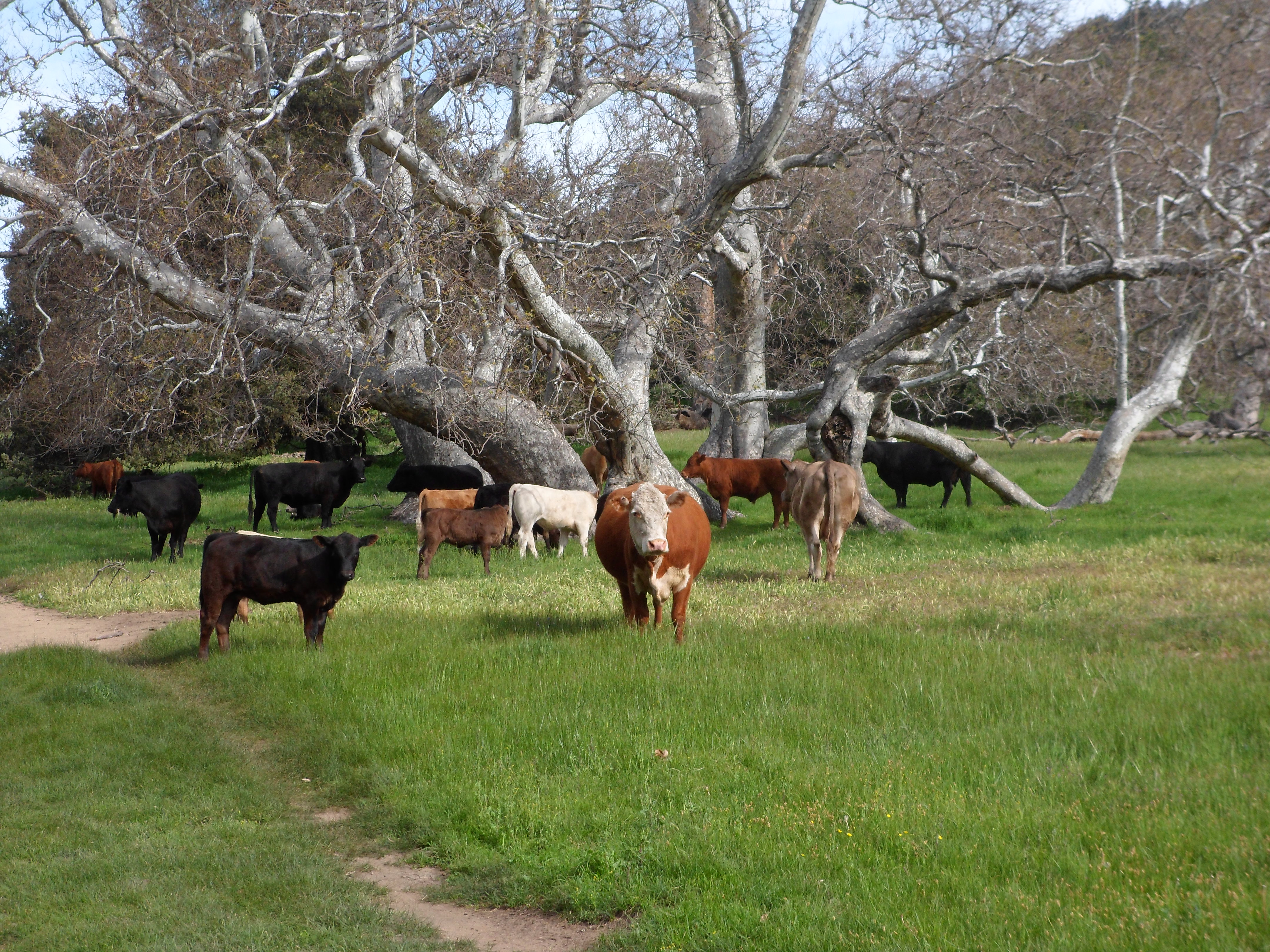 Ride Alongside:   How was the trip?
Rich:   The trip was great. It ended up being just what Kim needed for her first trip and now she is hooked. Starting in the mountains and ending on the beach and all the views in between made for a memorable experience. The campsite and having to jump on the 78 for 2 miles were the only slight bummers of the trip. I didn’t mind sharing the meadow with the cows or even the bugs for that matter but the sketchy vehicle activity that went on out there until about midnight didn’t make for the most restful sleep. The Deadwood performed almost flawlessly with over 35lbs of gear and water. I did have to stop and adjust the BB7 brakes after almost every long decent and about halfway thru the second day one of my bags must have been pulling on my front derailleur cable preventing me from shifting into my big chainring. 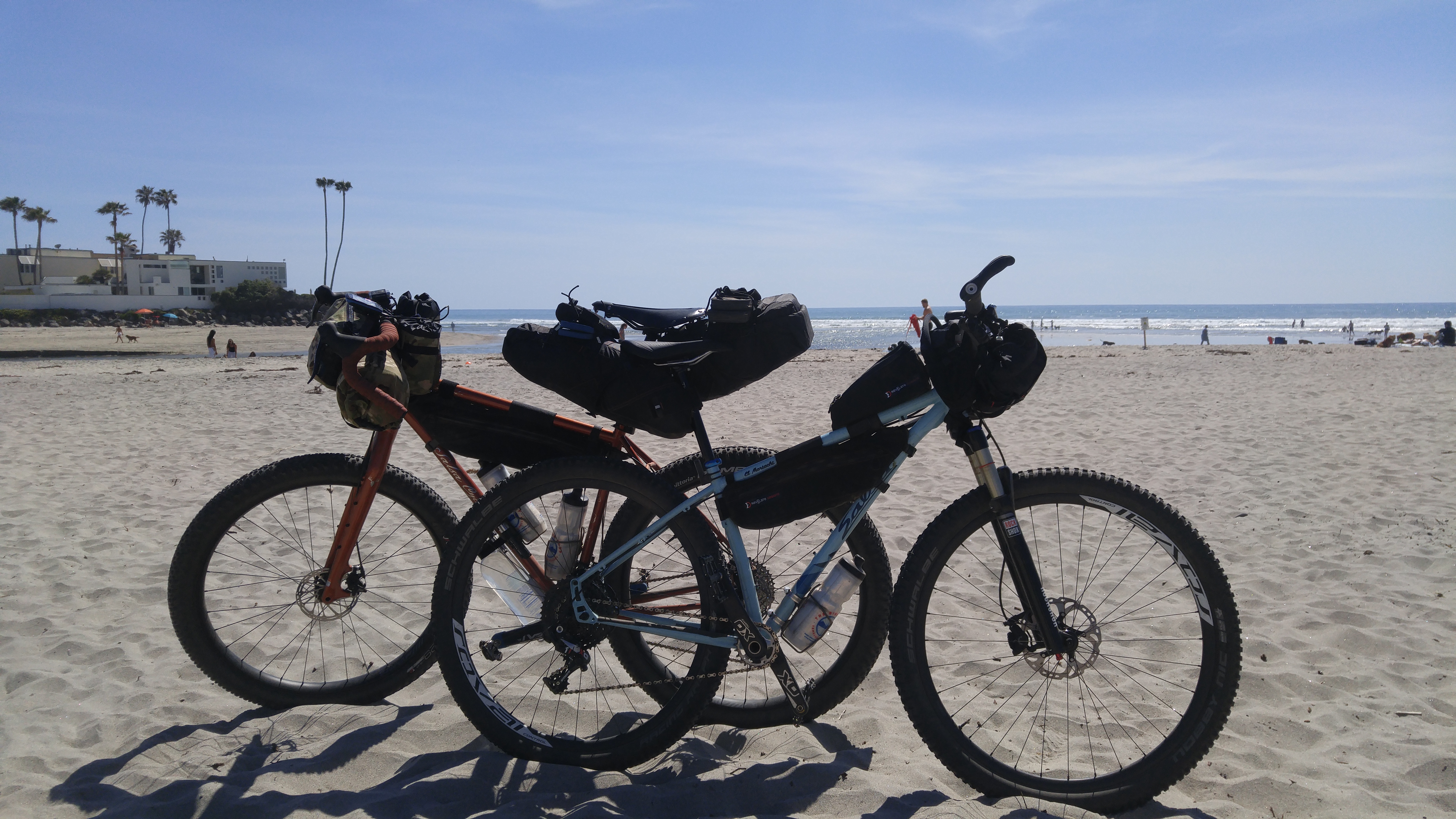 Ride Alongside:  Knowing then what you know now, after having that experience, what would you have changed?
Rich: We would have continued past the gate on Lower Santa Ysabel Rd. before setting up camp. As we started our ride on day two I found a few spots a short distance past the gate that would have made for better camping. 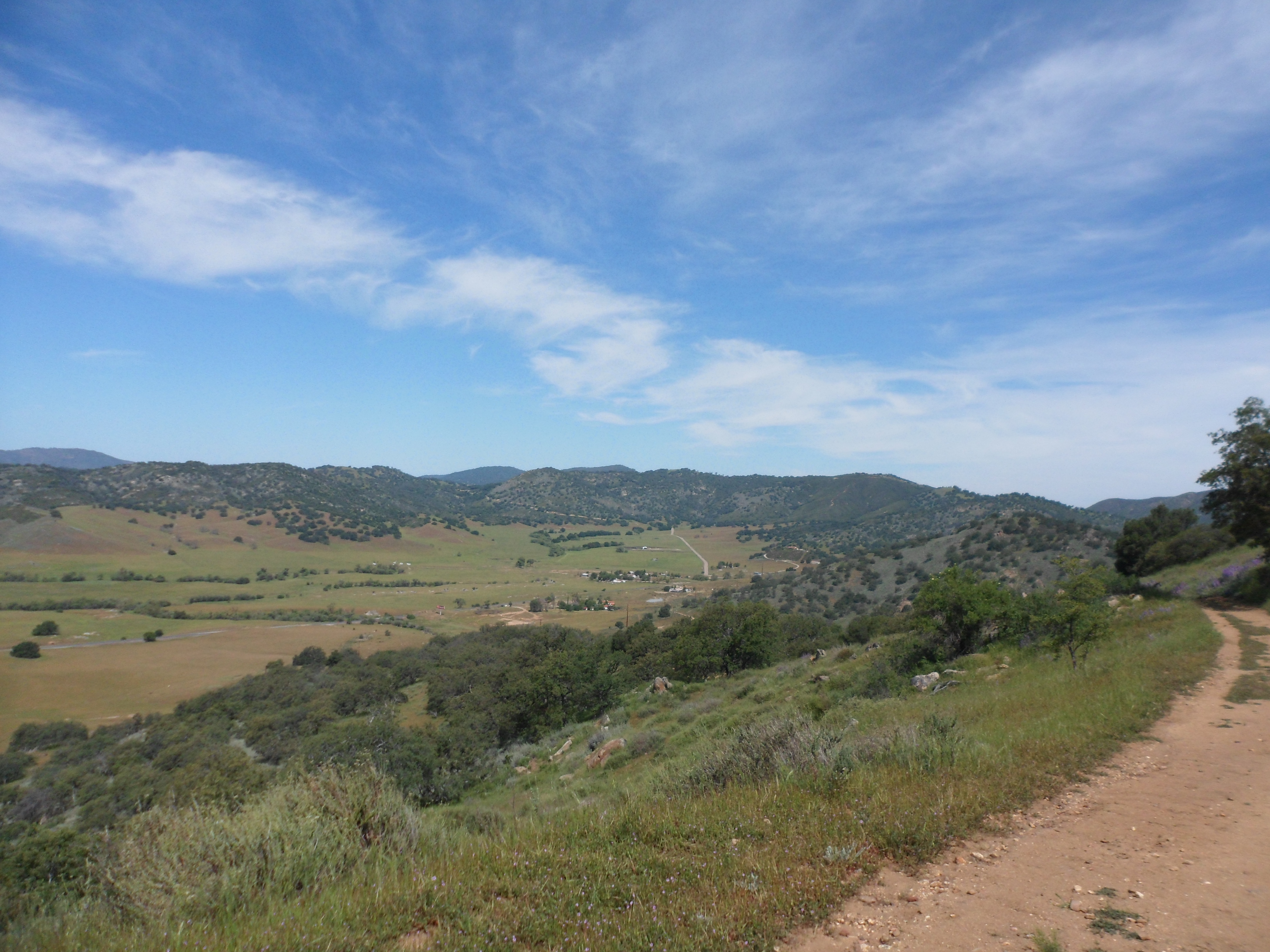 Ride Alongside:   I see that you have a Bikepacking 101 clinic you are putting on at your shop on May 4th, and a Salsa Demo Day on May 15th. I cannot commend you enough for putting on these types of events. I wish I was closer to your shop to fully take advantage of each of these, but I hope to make it to them regardless. Have you had these types of events frequently in the past? How often are you planning to put on events like these? Obviously they are beneficial for riders who are looking to get into bikepacking, but how do they help your shop and are they worth the extra effort to put them on, or would you rather just be out on another bikepacking trip? 🙂
Rich:   Well I would always rather be out bikepacking but If I can’t be out on the trail then I want to be having fun at work. Bikepacking has become a big part of our shop culture and giving others the info they need to get out and enjoy the trail with us is beneficial to all of us. You can expect to see more events like this from us in the future. We just added a Cuyamaca trip on May 21st.
Ride Alongside:   When is the next bikepacking trip you have planned? Can I join you?
Rich:   Aside from the shop trip on the 21st I’m planning for Kim’s second overnighter at Big Bear, in early June. You are always welcome on my rides. 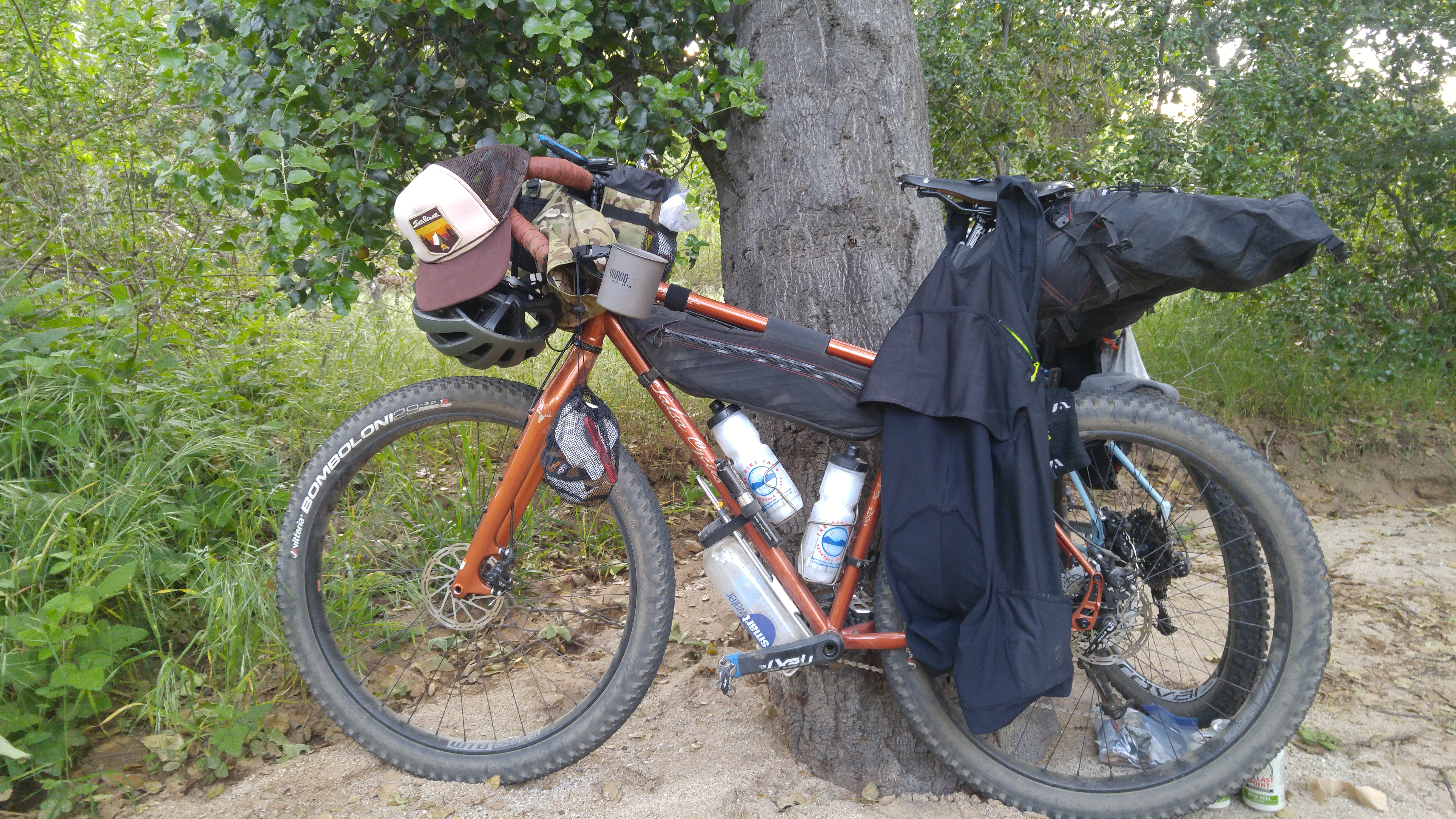 All photos used in this article came to us courtesy of Rich Wessels.

Go pay him a visit at The Bike Shop Temecula!

MTB Tip of the Week – Episode 9: Experiment or Never Know

Throwback Thursday – What I Was Riding 5 Years Ago