A first look at the 27.5+ full suspension bike.

I’ve been curious about direct distribution bike manufacturers for a while, so when one of my good friends pulled the trigger on a Fezzari Cascade Peak I twisted his arm into letting me take it out for a couple of spins on dirt. A lot of riders are skeptical about the ride and build quality of these companies compared to larger national brands, so I was really interested in finally trying one out for myself.

***The Fezzari Cascade Peak is listed in Ride Alongside’s regularly-updated PLUS BIKE LIST. Click HERE to see all the bikes in that list. Included are 275+ hardtail, 275+ full suspension, 29+ hardtail, and 29+ full suspension rigs.***

Fezzari seems to have a pretty great reputation among people who have seen and ridden their products, and I think it’s safe to say they far outshine other budget-minded direct manufacturers in both customer service and product quality. Of course there are also downsides to buying direct. We all love supporting our local bike shops, but sometimes the financial investment of buying from a shop is too big of a hurdle for some people to overcome. We only suggest buying direct if you are mechanically minded, and don’t mind paying a premium on service when you do find yourself dropping off your bike at a brick and mortar store. With that in mind, my friend, Brian, had an outstanding experience buying from Fezzari, and mentioned several times how impeccable and personal the service was. When placing an order, you speak to a representative from the company who compiles information from you such as your physical measurements, riding style, and intended use for the bike. They use all this information to customize parts like your stem, cranks, etc. Brian’s bike came tuned to his geometry, weight, preferences, etc. Brian is a bit shorter, and quite a bit leaner than I am, so I didn’t benefit as much from the customization as he does, but it’s still a really nice touch for anyone looking to purchase from Fezzari. 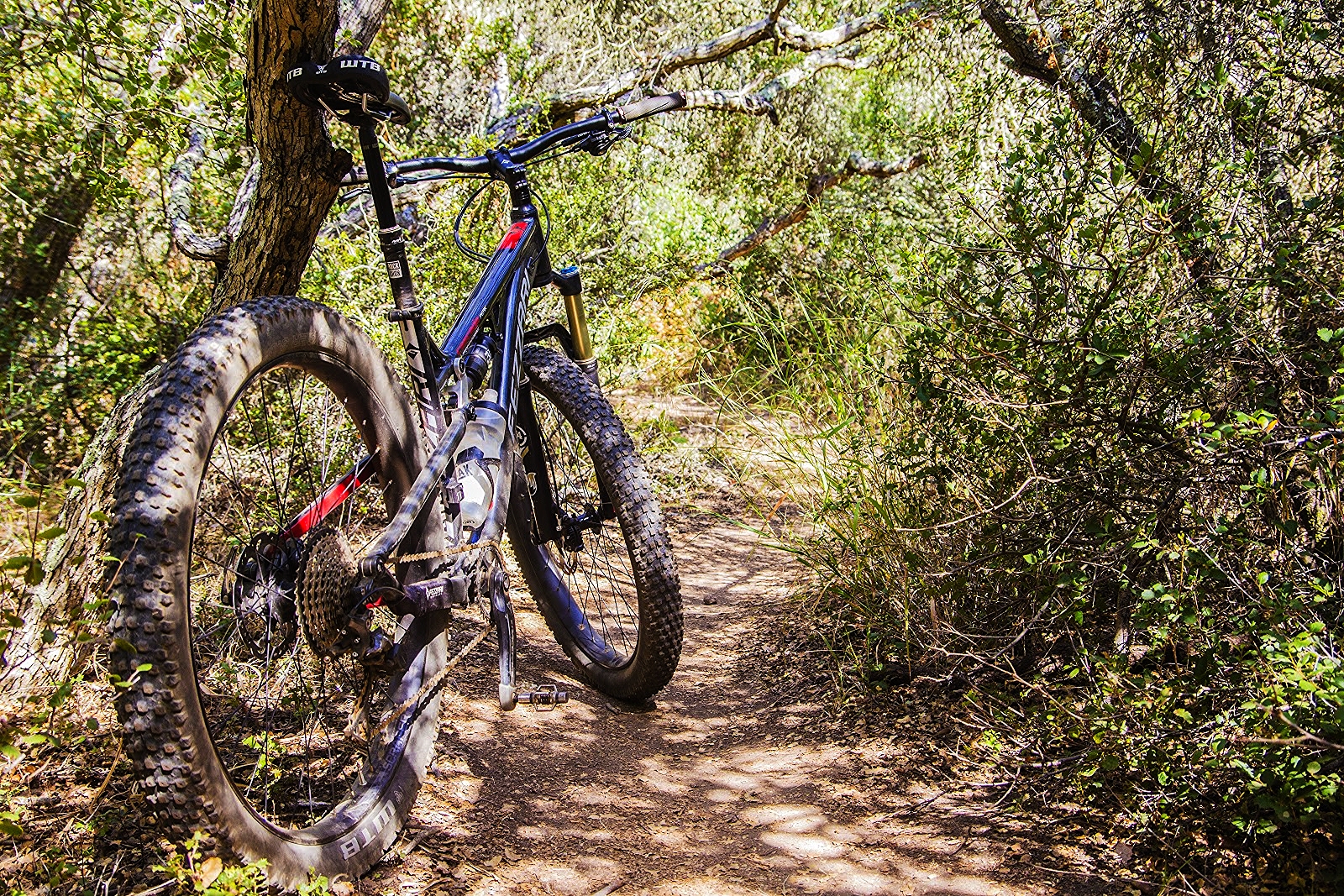 The Cascade Peak is Fezzari’s 27.5+ full suspension trail bike. As I’ve mentioned in past reviews, I ride mostly rigid, or hardtail plus bikes these days and I love the efficiency these designs offer. That being said, I still appreciate getting to ride full suspensions when I get the chance, and I was really interested in the ride quality of this wide-footed dually. I was able to ride the Cascade Peak in several different settings and on widely varying terrain, from long cross country trails to tight, twisty singletrack, and it never felt out of place.

My first thought on the bikes geometry was that I felt very well balanced on the bike, the geometry really sits you right in the center in a very comfortable position. The medium frame I was on felt like it was slightly on the larger end of the spectrum. However, Fezzari claims an effective top tube length of 600mm on their medium frame, which is actually a slight bit shorter than my medium Surly. The headtube angle is a middle-of-the-road 69 degrees. With so many manufacturers providing slacker geometries, I was happy with the more all-around angles of this bike.

The Cascade Peak comes with 110mm of rear suspension, provided by a Fox Float DPS air shock. Up front, a Fox Float 34 Performance Series fork gives 120mm of travel. Boost spacing is found all around. To me, this is just the right amount of travel for a plus bike, as the big three inch tires provide plenty of dampening on their own. XT components abound and provided the crisp, reliable performance you would expect. Many of the less critical components (stem, bars, etc.) are made in house by Fezzari, surely one of the ways they keep cost down. Finally, the wheelset is a pair of WTB Scraper i45 rims fitted with WTB Bridger 3.0’s. This particular model was upgraded with a Reverb dropper post. As is the case with most B+ bikes, you can also fit this frame with a standard 29er wheelset. 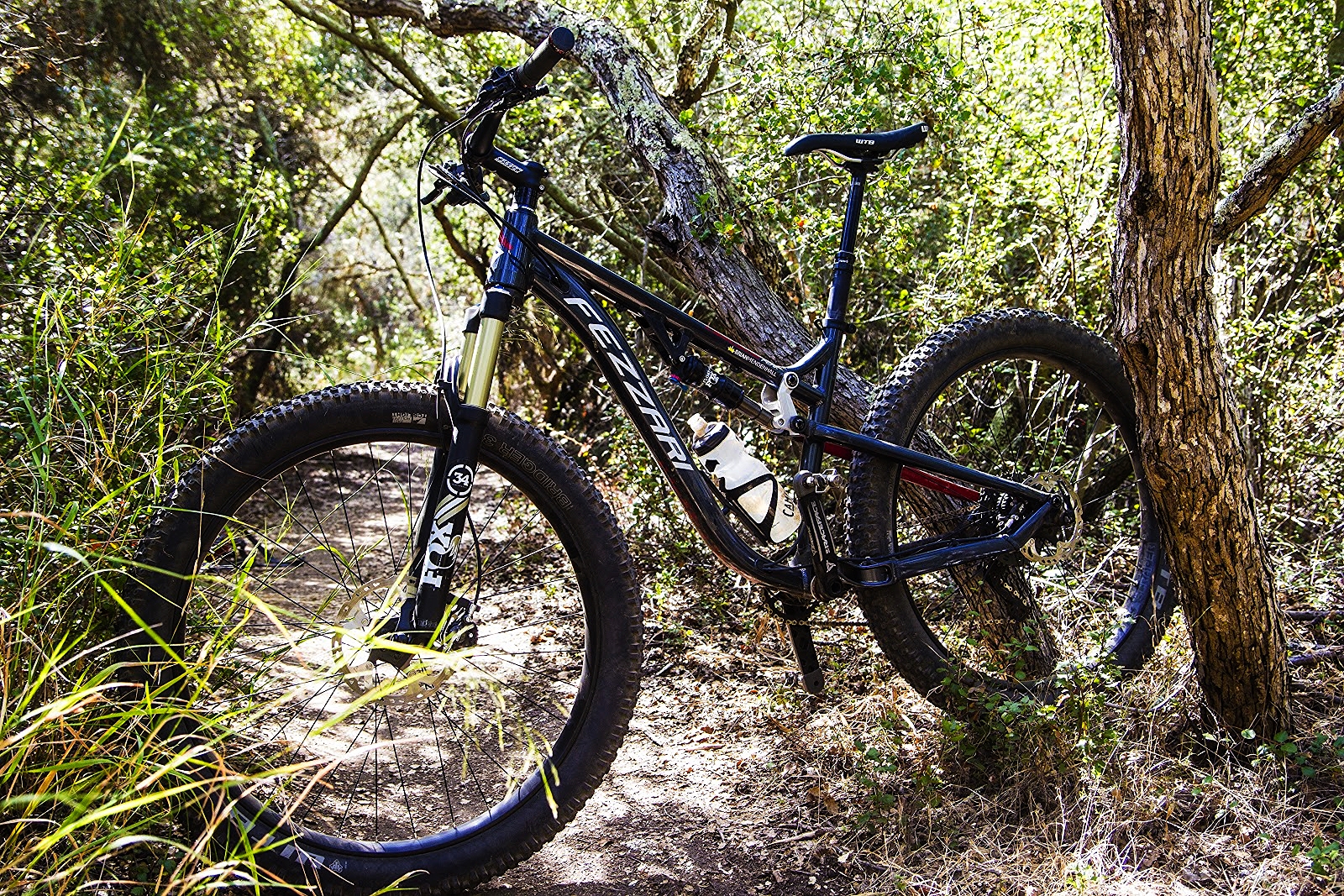 In general, there wasn’t much to complain about with this bike. It was a solid performer in every trail condition I rode it in. Both the front and rear three position suspension controls worked really well. The bike didn’t stiffen up quite as much as the Fuel EX9 27.5+ we reviewed recently, but for half the cost, it rode really, really well. I always felt confident and balanced on the bike, and it seemed happy to go wherever I pointed it without any complaints. Compared to other recent full suspension rigs I’ve ridden lately it had a nice high bottom bracket at 13”. This was a huge benefit on technical, steep climbs. Never once did I have a pedal strike. The suspension was exceptionally plush when I opened it up, and even though it was setup for someone smaller than me I never felt close to bottoming and the travel was buttery smooth throughout its stroke.

As you would expect, with its alloy frame, full suspension, and fatty tires the bike’s weight came into play on climbs, but not so much as I felt that it help me back considerably. The Cascade Peak is no race bike but that’s not what it’s designed for anyway. I had a few small complaints that could probably be remedied by swapping out parts and a touch of maintenance. First, I really liked the look of the Bridger tires with their mid-aggressive tread pattern. In most circumstances, they rode really well and I felt very comfortable cornering, even in loose conditions. However, these tires seem more susceptible to squirming and rolling over than other plus tires I have experience on. Even on the wide i45 rims, I needed more air than usual to keep the tires from rolling. I had to air up to around 22 psi to keep things feeling solid, which certainly negates some of the benefits of riding a plus tire. I’ve had similar issues with other WTB plus tires, although it may be unrelated. This issue was corroborated by Brian, who had experienced the same thing. I also noticed the frame was giving off some consistent clicks and creaks. Most likely this issue could be remedied by some maintenance, but it was significant enough for me to take note. This brings to light the drawback of buying direct as well. When you make a purchase from a local bike shop (LBS) you can expect the LBS to support you when you have any issues with the bike you purchased from them. Whether it is a simple maintenance task, like lubing the pivots, or adjusting the shifting from cable stretch, most local bike shops are quick to diagnose and remedy the issue and get you back out on the trails. When it is a bike you didn’t buy from them, they might treat you very well, but they obviously will not be quite as pleased that you had spent your money with a competitor. When it is a brand that is a direct purchase only, like Fezzari, they will know immediately that you did not buy it from a local bike shop. It is important to consider this future interaction and overall relationship with your LBS when you make this or any other bike purchase. Also, its puzzling that Fezzari lists the “Retail” price of this bike as $4,480 on their site, but then list the “Direct” price as $2,799. When the bike is only available direct, listing the “Retail” price so high seems misleading, since there is no other vendor actually selling it at the listed “Retail” price. Listing a “compare at” or similar type price of other bikes in the category with this level of components would be more straightforward.  Finally, the Cascade Peak came spec’d with a 30t RaceFace front ring and an 11 speed 11-42t cassette. This is the exact same gear range I have on my 29+ bike, but with the smaller wheel diameter it felt like it was geared too low to me for everyday riding. I think a 34t front ring, or even a 2x drivetrain (which it can accept) may be a better fit for this bike. The last issue with the bike that is minor, but worth mentioning is the water bottle bosses. The mount is located just above the curve of the down tube near the bottom bracket and does not accept regular sized water bottles. Brian, the owner of this particular bike, found that his water bottle hit the rear shock, so he designed a simple bracket/adapter that shifted the mounting location for the water bottle cage closer to the seat tube, which you can see in the picture below. 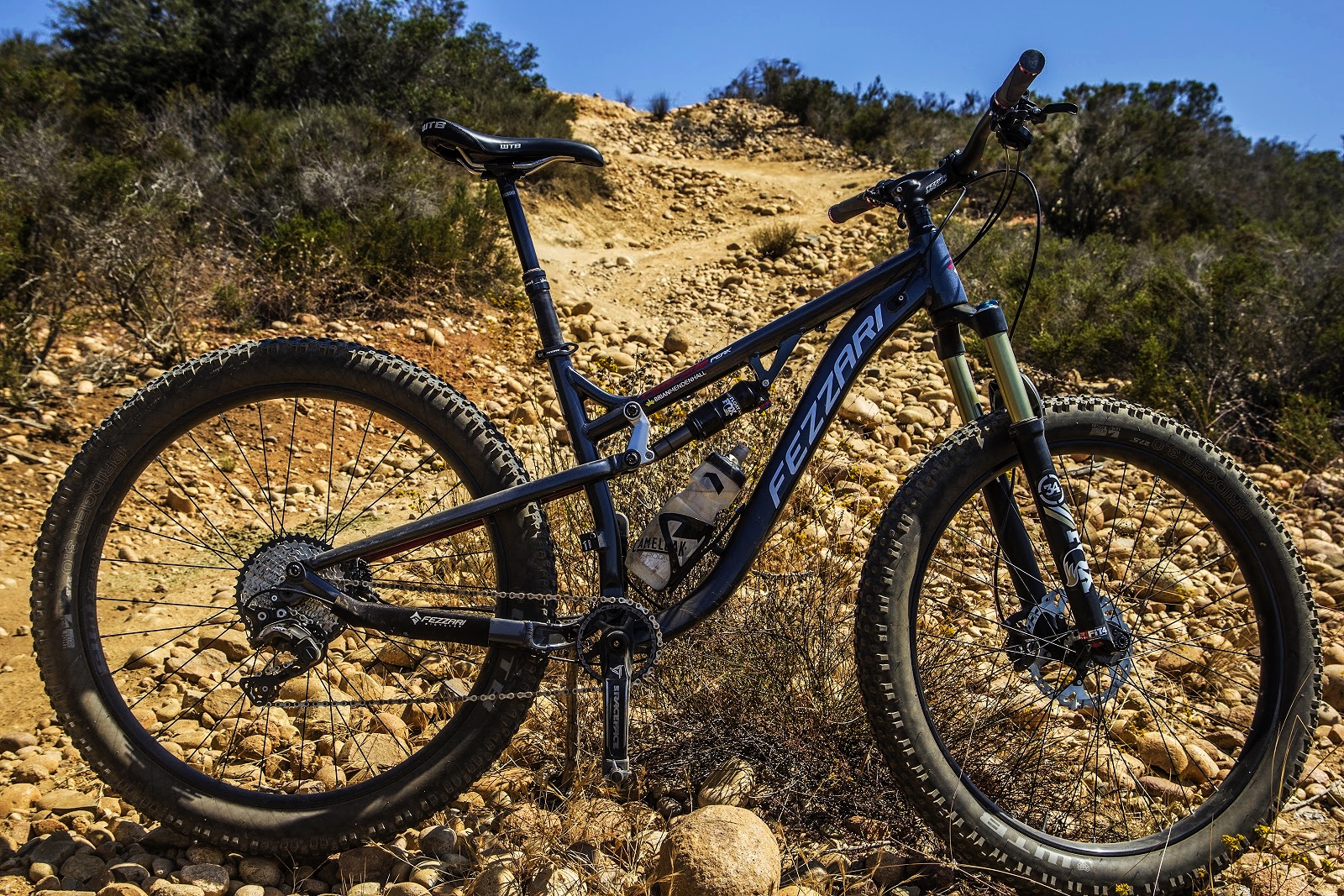 For budget minded shoppers who don’t mind not buying from a LBS, the Cascade Peak may be just the ticket. It shines as an all-rounder that was comfortable in every situation I rode it in. I would be curious to see if anyone has worked out a way to strap a frame bag in the relatively cramped front triangle. In the right circumstances this could make an admirable bikepacking rig. Craftsmanship, quality, and design seemed to be at least on par with any other major manufacturer I’ve ridden recently, and there seem to be no red flags associated with the direct manufacturer buying process. If you get a chance, check out one of these bikes, you’ll be happy you did. Thanks to Brian for the loaner! 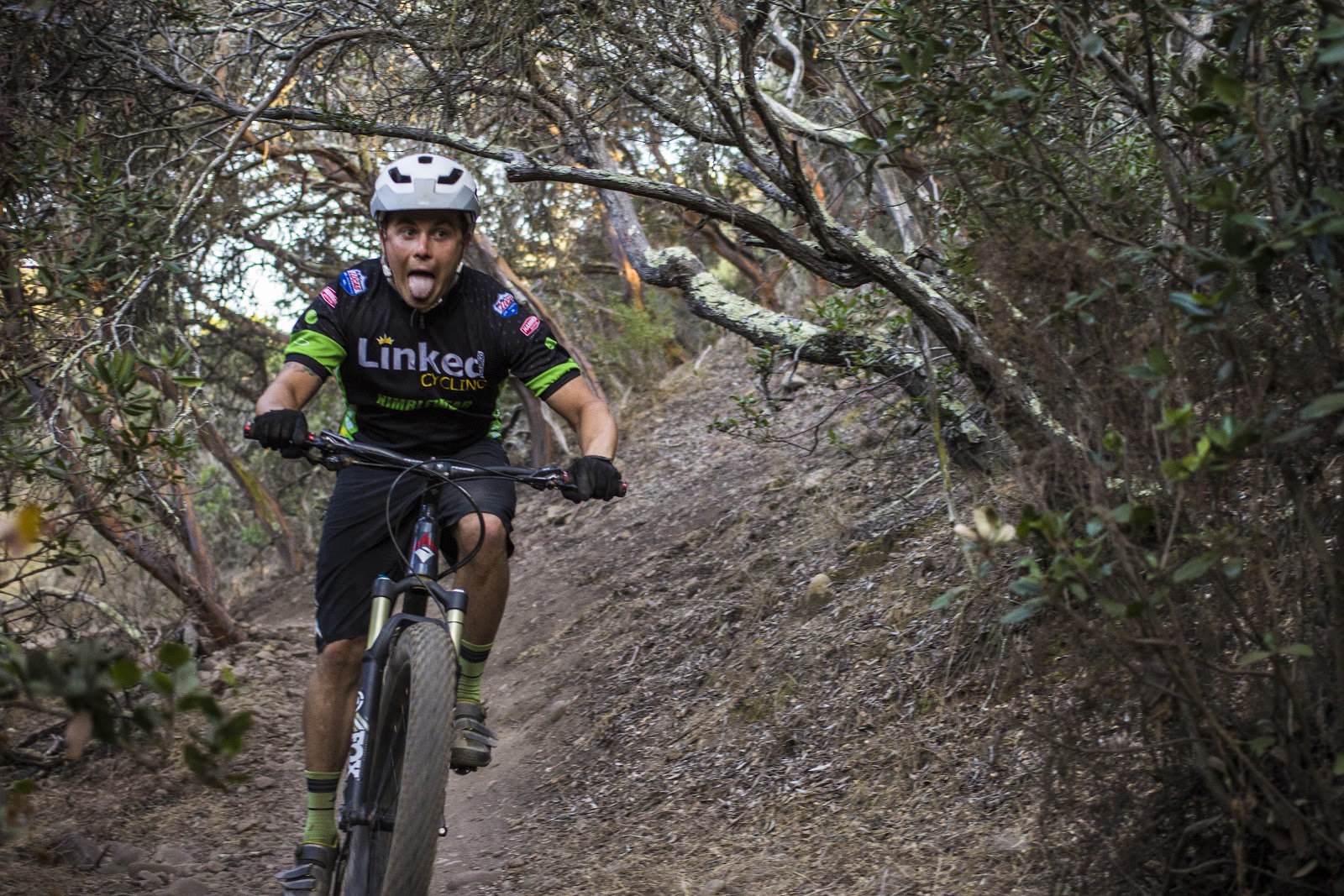 I went on my first real mountain bike ride in 9th grade. I remember I had never felt so much pain in my life. I stood on the side of the trail, almost in tears from my effort... then the trail pointed back down. I was instantly hooked, and bikes have been a huge part of my life ever since. I love the freedom of covering ground on my bike, and I happen to love trying out new and unique gear. My current fleet consists of a Surly Krampus, a Surly Karate Monkey set up as a rigid single speed, and a Salsa Colossal.